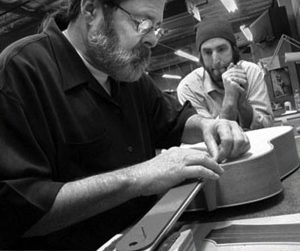 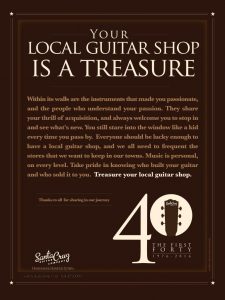 The OOO is the 12-fret predecessor of the OM. If access past the 12th fret is of no concern, the OOO adds some distinct advantages tonally and cosmetically. The extension of the body to the 12th fret adds additional airspace, which translates into increased sound volume and a more predominate bass in the EQ. The slotted peghead is a standard feature that adds classic styling. The peghead’s reduced mass accentuates the guitar’s open, airy ambiance, making it a fingerstyle favorite.  You’ve seen the SCGC OOO on stage with Jeff Tweedy and Dave Matthews as a solid performing songwriter’s tool. It has also been heard in numerous recordings as a mainstay of pro session players. You will find immediate purpose for the OOO and wonder why you didn’t have it in your arsenal all along.

The Tony Rice Signature Model represents over 30 years of collaboration between the world’s foremost flatpicking icon and SCGC’s founding luthier, Richard Hoover. Today’s model incorporates decades of refinement in response to players’ demands and the sophisticated evolution of the master’s technique. Never intended to be a copy of Mr. Rice’s iconic 1935 Martin D-28, the TR Model is voiced to showcase his stellar lead work with influences from Clarence White to John Coltrane. This guitar delivers exactly what the contemporary flatpicking artist needs: substantial treble and midrange for rapid single-line lead, clean note separation for definition and the traditional bass boom without the woofy bottom end of some of the venerable Pre-war dreadnoughts. Master grade Indian Rosewood and old Sitka Spruce give this instrument a professional presence at an attainable price.

The FS Model was designed in response to the renaissance of alternate tunings for complex fingerstyle arrangements. Tacoma and Windham Hill labels provided the showcase for these new and sophisticated steel string explorers who were attempting to express themselves on booming dreadnoughts. Will Ackerman, Robbie Basho, Daniel Hecht, Duck Baker and Michael Hedges all looked to SCGC for the teams’ expertise in achieving custom tone to make an instrument with the perfect voice for this new style. With input from the pros, the tiny SCGC team at the time, which included Jeff Traugott, Michael Hornick and Steve Palazzo, stepped up to the challenge with this concept: design and build a specialty fingerstyle instrument

that responds with immediacy and volume to the minimized energy imparted from fingertips and the reduced tension of many open tunings. Give it a contemporary aesthetic of simple elegance and complexity of tone that the player can not outgrow. Twenty-five years and numerous awards andaccolades later, The Fretboard Journal credits the Santa Cruz FS as the inspiration for the guitar designs of some of the brightest lights in contemporary lutherie and a strong influence on major manufacturers. The FS is a truly sophisticated instrument that will allow the best possible presentation of your fingerstyle technique.